I have wanted to travel by train in China for a long time. I finally got my wish. When I came to China to start my new job, I was worried about taking the train because I had a lot of luggage. So my hosts from the school picked me up at the airport in Wuhan, it was a long night time car ride to Shiyan for all of us. Later,  it turned out, I had to have a medical examination in Wuhan, so it was arranged for me to go there and back by train.

My go-to contact at the school, a  local teacher at the school, was my guide for the trip. We found a taxi, and soon arrived in the railway station in Shiyan. The tickets had already been purchased, so we sat in the waiting area for a while and chatted. When the gates opened, there was quite a scramble, in spite of the fact that everyone has assigned seats! However, on the platform, passengers boarded the train smoothly and politely.

It was a beautiful, sleek, streamlined, white electric multiple unit train, two double ended sets coupled back to back. It’s known as the CRH. My first impression once aboard was that it was very similar to being aboard an airplane, but with much more leg room. It has the same fold down dinner trays and so on, but the luggage rack is open, rather than having doors. There are two seats on one side and three on the other. My seat was very comfortable. I rode in coach, and I think you can purchase a seat in a slightly more spacious and comfortable class.

Once we began to move, I felt the smoothness of the track. There are almost no detectable bumps to speak of, until almost 60 KPH is reached. For a lot of the trip, the train runs at about 155 KPH, and the 700 Km journey takes only about 4 hours. There is almost no noise from the track or engines, mostly you can just hear the whir of the air conditioning unit. The vibration and swaying of the train is so little, that you can comfortably walk around to stretch, visit the bathroom, or visit a view window if you have been deprived of a window seat.

The Shiyan to Wuhan train travels through some very interesting countrysides and urban landscapes, so it is worthwhile to get a seat with a view. The area is full of large hills and small mountains, so there are plenty of tunnels and overpasses. While in a long tunnel, you will suddenly leap out into a small valley, sometimes inhabited and sometimes not. Due to the track speed, it is often gone again in the blink of an eye.

Some things you can see are, traditional Chinese hillside graves, farmers tending plants and animals, stunning tree covered hills and valleys with tiny farm plots, several large rivers plied by large boats and barges, large bridges and overpasses and other projects under construction, views of large cities, many quaint track side buildings connected with railway operations, uniformed crossing guards and occasional observers, curious, or watching the trains with their children.

I believe that I eat a good diet. However, I have bowed to pressure from various family members to supplement it with multi-vitamins. Expecting high prices, I set off to buy some in Harbin. I entered the drug store, and acted as nonchalant as possible. I always try to find my items before someone comes to attempt help, as that doesn’t always go well. To be unhelpful is unthinkable to a Chinese, and especially in a store. But my Chinese is extremely sketchy. I’m fine with most foods, and handle purchasing with no small measure of pride. Even when I can’t comprehend the price when I am blasted with it at supersonic velocity. I try to negotiate another attempt, but it is usually accomplished by turning the cash display towards me, or by punching into a calculator.

This store offered me no refuge. Within seconds, a kind lady was at my side at the vitamin shelf, which I had already located. Her speech was native, full bore. Hemming and hawing in broken Chinese, I waved at the bottles and attempted to communicate the concept of “multi”, with a word I think means “together”. She appeared mystified, I suppose she thought I was going to buy out the store, or something like that.

Aha! I found multi-vitamins! Oh, but what’s this? It’s for women. In retrospect,  I suppose that eating them wouldn’t raise my voice to a higher octave or anything like that, but I have years of proud Western male pride to overcome. So I waved it in front of here and said, “nan” (chinese for man). She nodded knowingly, and with great satisfaction, offered me a box from a lower shelf. It was none other than, “Essence of Kangaroo”.

Now, I consider myself both gifted and cursed, with a mind that can think, as we say, “out of the box”. Sometimes it is so quickly ambushed, or overwhelmed with dissonant concepts that it cannot really function. So please excuse me, that my first thought was simply, “What is the nutrient composition of kangaroos”? Such is the strength of my faith in older sales ladies in drug stores.

I quickly regained my composure (although I doubt that it appeared so on the outside), and said no, not that. At that moment, I found the men’s vitamins to the left of the women’s, and thanked the woman. She pointed me to the cash register. I paid the outrageous 95 yuan price, but was drawn back irresistably to the kangaroo medicine shelf. I confirmed the label. I hadn’t been dreaming.

Leaving the scene of this encounter, a series of questions formed in my mind. Foremost being, what does essence of kangaroo do to a person? Linking this to my request for a male gendered product, I supposed that the lady thought I needed an aphrodisiac or such “male performance enhancer”. I do have some gray hair. If it would add some bounce to my step, it couldn’t be bad.

Secondly, how is essence of kangaroo obtained? From which part, or from all parts? Are kangaroos likely to become an endangered species as a result of this prescription? It occurred to me that I might not even want to know the answer.

Third, and this is more philosophical. Are they entitled to use “essence” in this manner? The animal has such grace, at least as it is famously painted by the Australian aborigines. I have one such decoration, and noticed immediately the life force in it that was so well depicted. Wouldn’t it be false advertising to claim that a kangaroo’s “essence” is actually some fluid in its nostril, or somewhere? More believable with an ignoble animal such as a pig, whose essence must necessarily be laboriously located and refined to be believable.

The question must now be asked, how many kangaroos were consumed in the production of this medicine? It was a disturbingly large bottle.

Lastly, what other delightful essences are in stock there? I am going back soon to feast on my new found gallery of epic pharmaceutical wonders.

From the 10th floor of Harbin University of Science and Technology 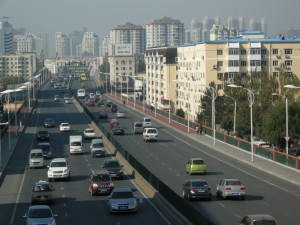 Looking along Jiao Hua Jie towards the river near XidaZhi Jie

I am in Harbin, Heilongjiang province of China. I recently started working here, teaching English in a private school. I’ve been ridiculously busy taking training and getting used to the job. So I haven’t really had a chance to photograph. In fact, the good camera hasn’t even been out of the bag yet. I didn’t have room to bring my guitar, so I haven’t had any fun playing either. Just work and eat, sleep and do laundry.

Of course, I’ve been around the town a bit since I got here, and there is a lot to take in. It’s lucky that I’ve arrived in summer time, so I can explore more freely on foot. I’m sort of on the edge of downtown, so I haven’t spent much time in the core. I hope to be able to get some pictures up here soon.